Biking and Barging Through Holland 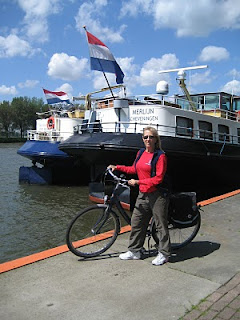 One trip I had in my Bucket List was bicycling through Holland, so I was thrilled when I was able to fill a vacancy on a Bike and Barge trip there last April with the Clearwater Snowsharks. Like most ski clubs, the Snowsharks plan trips throughout the year and their annual bike and barge trip is always booked a year in advance. I got lucky!

Our group took over two 12-cabin barges which were once working the waterways of Europe but are now converted into  comfortable passenger barges. Here I am in front of my barge, the Merlijn.
Our itinerary went from Brugges, Belgium, north  to Amsterdam and I must say it was an excellent trip all around. Our bicycle tour guide was very experienced and we were thankful, because the many biking routes are spread like a spider-web across the land. Finding our routes, which were often narrow gravel  paths, dirt roads, dykes and some city streets, would have been difficult had we biked on our own. 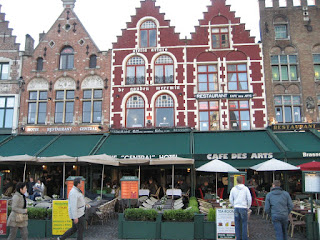 We visited beautiful historic cities such as Brugges, left, and Ghent in Belgium and rode through picturesque countryside filled with cows and windmills in the Netherlands. Each day we would depart after breakfast, cycle a couple hours, stop for a long  lunch, then bike some more and end up at a small town where the barge was waiting for us.

Meals and lodging on the barge were nothing fancy, but then if you want fancy go take a cruise. We toured cathedrals and museums and most nights we could wander around the town where we were docked. 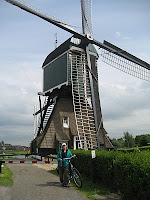 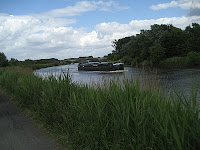 Since the countries are flat, it was an easy ride of 25 to 35 miles each day. I loved my Trek hybrid bike, which was like new and is provided when you book the trip. If you are thinking of doing a bike and barge trip, I highly recommend the Merlijn excursion from Brugges to Amsterdam.