Sea Turtles and More in Monterrico 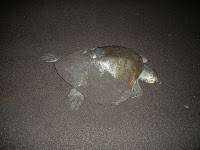 By Ronnie Lovler
I said I would tell you about seeing the sea turtles on the beach of Monterrico in my last post, and now I will. It happened at night, of course, which is when the sea turtles lay their eggs.  I was opting out of the trek along the beach because I was a bit worn out from the day. 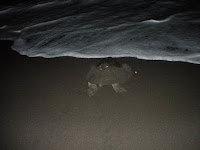 My son, who is many, many years younger than me, (duh, of course, or he wouldn’t be my son!)  was up for adventure, so he went out to walk along the beach.  Sure enough, he found what he was looking for – sea turtles.  Then he came racing back to get me.  So I just had to go.  And lucky for me, there was one sea turtle had not yet made its way back into the water. It was amazing. Words fail me. That was my first sea turtle and this may sound like an exaggeration, but if I had gotten nothing else out of this trip, seeing that sea turtle might also have been enough. 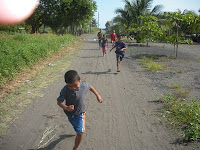 One of the things I did that week in Monterrico was teach English classes to many of the kids from town. My host always organizes these types of givebacks. So in the morning, I was sitting down with the older kids (aged 12 – 15); and in the afternoon, when they got out of school, dozens of the younger kids would race over for their introduction to English. It is rewarding, but for this old gal, also exhausting.
Posted by Marcia Biggs The Getaway Girl at 2:57 PM

Guatemala: Everything I remember and more

It has been more than ten years since my last trip to Guatemala, so going there again was really a treat. This time around I was traveling with my 22-year-old son, Tiffen. Our first stop was Monterrico – a small village on Guatemala’s black sand Pacific Coast.

From the airport, we went straight to La Avellana where we caught the “lancha” or ferry to Monterrico.  It was a four-hour ride, even though it is less than 125 miles away.  Why, you might ask? Traffic coming out of Guatemala City, which is more than words can describe. Rain. And roads that are filled with potholes and the aftermaths of frequent mudslides.
When we got to La Avellana we were able to get one of the last “lanchas” into Monterrico. These are more like motorized wooden rowboats. Yes, there’s a motor, but oars are there, just in case.

And we arrived, bodies, souls and luggage intact.  It took twice as long to get from the airport in Guatemala City to Monterrico than it did to fly from Miami to Guatemala (and that’s including airport security, pre full body scanning of course!).
But this shouldn’t put you off – it’s part of the adventure – and when you get to Monterrico it’s well worth it, as long as you are not looking for high-end hotels, with fancy restaurants and a neon-studded nightlife.
It’s a village on the beach. And it’s a village on the beach in a developing country. It’s laidback and low-key.  The sunsets are fantastic. Every night, it seems. And so are the walks on the beach – even at night. The sand is black and the sky is black. You can see the stars, because the there aren’t lots of streetlights to dim the view.  The only real light comes from  the flashlights of people looking for the sea turtles that have come to shore. We got to see one. Amazing. I’ll tell you more about that in my next post.
Posted by Marcia Biggs The Getaway Girl at 12:16 PM

Marcia Biggs The Getaway Girl
Tampa, Florida
Some people wonder “What is the meaning of life?” I, on the other hand, wonder where my next trip will take me. Welcome to my site, Getaway Girl Travels. I am a travel writer based in Tampa, Florida, but you won't see any guides to theme parks here. I do adventure travel "light": skiing, biking, hiking, rafting, kayaking and exploring the great outdoors. My travels have taken me from cruising the Yangtze River in China to skiing and biking in Switzerland and kayaking in the Everglades. I love living here in the Sunshine State, so exploring Florida is always a great getaway! My travel stories have been published on VisitSouth.com, Tampa Bay Times, Tampa Tribune, Miami Herald, and Allegiant Airlines Sunseeker.