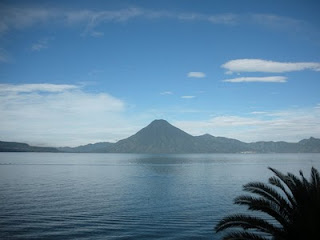 I’ll kick off with this picture of Lake Atitlan and the Atitlan volcano to begin this post. The first glimpse of the lake and the volcanoes is one of the times when the phrase "breathtaking" really does apply. Atitlan is the deepest lake in Central America and its waters don’t flow anywhere else. What makes it such a spectacular sight are the three volcanoes that ring it – Atitlan, San Pedro and Toliman. Atitlan, which you glimpse here in our picture, is still active, although it’s been almost 150 years since it last erupted. 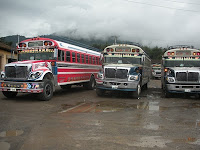 The traveler can catch a first glimpse of the lake on the approach into Panajachel from the Interamerican Highway. Don’t be deceived by the highway nomenclature. Consider it a paved path. You can drive, but I wouldn’t. I’d rather take my chances on the “chicken bus” so named for the obvious reason … the bus can hold passengers and chickens. On our journey, there were only people onboard – at least as far as I know – but we were crammed in like chickens! Sorry that it didn’t occur to us to grab a picture, but we did grab some shots for you outside the market in Antigua. 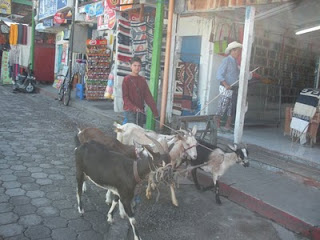 Panajachel is the main point of entry into the highlands. The town is a center of commerce for the indigenous Mayan communities who call the region home.We were able to find a nice little hotel – Mario’s – two beds, hot water, cable TV and breakfast for about $20. Nope, it wasn’t the least costly way to go, but we thought the price was right for comfort and cleanliness. And there was a computer room, with a couple of ancient Mac computers in the second-floor lounge where we could do a quick check of email. And we were right on the main drag – where we could catch a glimpse of the goats going by in the morning.

It was a good starting point from which to plan our Atitlan adventures. Details coming up.