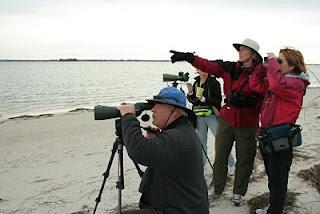 After my bike ride in the Everglades (see post below), I volunteered for the annual Audubon Christmas Bird Count. I was lucky enough to be invited to count with the North Pinellas team at Caladesi Island, considered to be one of the world's most beautiful beaches near Clearwater, Florida.

Every year from Dec. 13 to Jan. 5, before the first rays of sun cast shadows on the ground, tens of thousands of people from Alaska to Antarctica roll out of bed, stuff backpacks with

binoculars and head out in search of birds. From yellow-bellied sapsuckers to burrowing owls and tufted titmice, birds of every species are spotted, tallied and added to a massive database that began more than a century ago.

I wrote a story about it for the front page of the Tampa Tribune and took lots of photos. Caladesi is like ground zero for shorebirds ... we counted hundreds of them. It was a great experience!