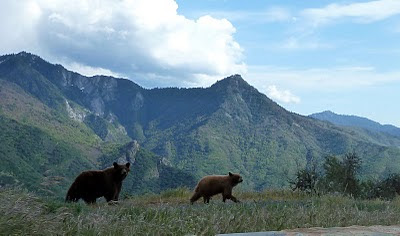 Everywhere you go around the Sierra Mountains, there are warnings about the bears. Don't feed the bears. Watch out for the bears. Well, today, we finally saw those sneaky bears! Freaked us out as we were driving along the main road in Sequoia National Park, ro 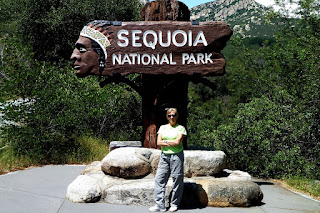 unding a curve and there they were ... a mother and 2 cubs. Took this photo from the car window.

Today, we drove south from Yosemite to a really beautiful area where both Sequoia and Kings Canyon National Parks are located. It's a region of lush green forested mountains and rushing mountain rivers filled with boulders and white water rapids.

Although warm at lower elevations, as we drove up the winding park road the temps dropped 25 degrees a 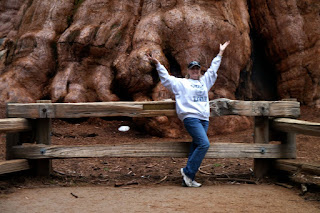 s we got to around 4,500 feet and there was snow everywhere! Many trails and roads in the park are closed due to snow. This area is known for the famous towering Sequoia trees, so we had to make a stop to see the General Sherman Tree, the oldest living tree in the world. Here's Val in front of the tree at ground level.